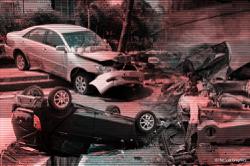 GEORGE TOWN: A 49-year-old woman was killed in a freak accident after she was hit by a car, crushed against a wall that then collapsed, causing both vehicle and victim to plunge 20ft at a condominium here.

George Town OCPD Asst Comm Soffian Santong said in the incident that occurred at about noon on Thursday (Dec 3), the victim was walking at the condominium driveway that is located at level one which is near the main entrance.

"Initial investigations found the victim was on her way to her car when she was suddenly hit by another vehicle entering the condominium.

"A 71-year-old woman who drove the car was startled when she saw the victim suddenly crossing in front of her. She accidentally pressed on the accelerator, ramming into her.

"The vehicle then crashed against the wall of the driveway before falling about 20 feet onto another car below," he said in a statement later Thursday.

ACP Soffian said as a result from the collision, the victim was crushed and dragged by the falling car, and killed on the spot.

It is learnt that the 71-year-old woman was injured and was brought to Penang Hospital for treatment.

Rescue personnel spent more than one hour to extricate the body from the mangled vehicle.

The case has been classified under Section 41(1) Road Transport Act 1987. 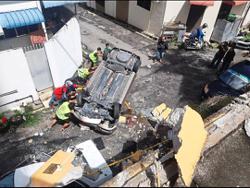