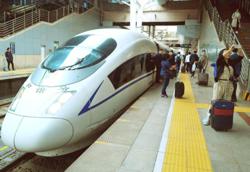 The conference call was made in view of the Dec 31 deadline for the second and final extension of the project’s suspension.

“The Prime Ministers took stock of the progress of discussions, and gained a good understanding of Malaysia’s and Singapore’s respective positions.

Both sides will announce further details on the HSR Project through a joint statement in due course, ” said the Prime Minister’s Office.

It added that both leaders had also reaffirmed the strong bilateral relations between the two countries, covering many areas of cooperation and the sincere desire to further strengthen these relations for mutual benefit.

In June, Senior Minister Datuk Seri Azmin Ali said both governments had agreed to extend deferment of the HSR project to Dec 31.

He added that both sides had also agreed to resume discussions on the HSR infrastructure project with proposed changes.

Azmin, who is leading the Malaysian team in the discussions with the Singapore government on the project, said the talks would encompass some of the proposed changes in the commercial and technical aspects of the project.

“Both sides mutually agreed to extend the deferment of the Kuala Lumpur-Singapore High Speed Rail project to Dec 31,2020, ” he added.In September 2018, both governments had agreed to suspend the construction of the 350km-long railway project until May 31,2020, in order to find the best way forward for it.