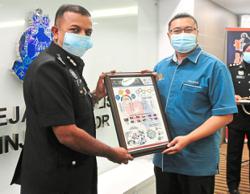 KUALA LUMPUR: Cops are investigating a man whom they said threatened to shoot Inspector-General of Police Tan Sri Abdul Hamid Bador (pic) and attack Bukit Aman and the Defence Ministry.

Bukit Aman CID director Comm Datuk Huzir Mohamed said the police are in the midst of tracking the man down.

"We are investigating under Section 507 of the Penal Code for criminal intimidation and Section 233 of the Communications and Multimedia Act 1998.

"We also discovered that the suspect might not be sane. We will track him down nonetheless," he told a press conference in Bukit Aman on Tuesday (Dec 1).

It was reported that a man, who claimed to be the leader of LTTE 2.0, alleged that he will attack Bukit Aman and the Defence Ministry's headquarters.

The man, who had sent the threats via email, also claimed that he will attack Sri Lanka after the two attacks.

He is also alleged to have threatened to shoot Abdul Hamid.