ISKANDAR PUTERI: The state government is taking several measures to increase its revenue next year despite the challenges posed by the Covid-19 pandemic, says Johor Mentri Besar Datuk Hasni Mohammad.Hasni said the state had come up with several plans to cope with its deficit budget of RM248.14mil due to expected increase in spending and a drop in revenue.

“We are currently conducting a study to look into other potential new sources of revenue. These are expected to add about RM70mil to the state government’s coffers, ” he said during the state assembly seating at Bangunan Sultan Ismail in Kota Iskandar yesterday.

Several assemblymen had asked Hasni about the state’s initiatives to cope with the drop in government revenue due to the pandemic.

“Besides that, the state Forestry Department will increase its enforcement on illegal logging.

“The state government will also be studying the Entertainment and Places of Entertainment Enactment 1998 to ensure that tax collection is conducted effectively, ” he said.

Hasni noted the projected RM1.60bil revenue, announced during the tabling of Budget 2021, included RM773mil from tax collection, RM605mil from non-tax income and RM230mil from other sources.

“However, this is still in the exploration and research phase which is expected to be completed by the beginning of next year.

“If the research shows an abundance of underground water source, the state could use the water as an alternative to existing water plants that run low during the dry and hot season, ” he said.

He added that the Mineral and Geoscience Department (JMG) was also currently conducting six projects to explore underground water source near water treatment plants to increase the capacity of raw water.

“The projects are being conducted with allocation under the Federal Government and is expected to be completed by the end of this year, ” he said. 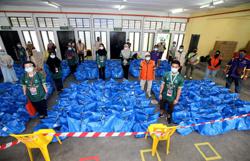