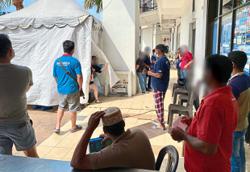 He said this was to ensure the smooth implementation of targeted screening of foreign workers, such as partly subsidising the tests since not every employer could afford to carry out such screening.

“Is there enough capacity to carry out all the tests? Are we identifying risk sectors? What about employers who cannot afford the tests?”

Jagdeep said it was an arduous task to screen 15,000 foreign workers from the construction sector in April as some companies could not afford the tests.

“We reduced the costs of the test, which is between RM600 and RM700, through collaboration with an organisation.

“Penang was the first to do this screening. Socso declined to absorb the cost since the construction industry was deemed high risk then.

“When you close a business or company for the screening, they suffer financially, on top of the cost of screening.

“Do the clinics have the capability to do the testing? As this must be done with stringent standard operating procedures (SOPs), ” he said at a press conference after attending Guru Nanak’s 551st birthday celebration at Penang Wadda Gurdwara Sahib in Jalan Gurdwara yesterday.

This is following a spike in infections at workplaces, particularly in factories and construction sites.

Senior Minister Datuk Seri Ismail Sabri Yaakob said on Friday that the screening will be done in phases, with the first phase in Selangor, Kuala Lumpur, Penang, Labuan and Negri Sembilan.

Previously, the Human Resources Ministry announced Socso would subsidise up to RM60 for each test and only once for each worker.

Jagdeep said there were 13 clusters in Penang and that local authorities had done 23,159 screenings across the board in these clusters.

On the gurdwara, Jagdeep said that he was very happy that the Penang Sikh community had joined others throughout the world in helping needy folk during the Covid-19 crisis.

Penang Wadda Gurdwara Sahib president Daljit Singh, who was at the press conference, said the temple has helped over 2,000 families, including those who are jobless and stranded foreign workers.

He said the 120-year-old temple, which is a Category One heritage building, was undergoing renovation and conservation at a cost of RM5.5mil, with work expected to be completed in late 2021. 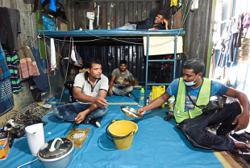