BATU KAWAN (Bernama): Two Bangladeshi workers were seriously injured after a concrete wall collapsed on them while they were carrying out renovation work at a private college lobby in Bandar Cassia here Sunday (Nov 29).

Penang Fire and Rescue Department operations officer Azmi Tahar said one of the victims, Moshak, 42, suffered serious facial injuries and his right palm was crushed while his co-worker Mannan Abdul, 40, was seriously injured in the legs and abdomen.

"We were alerted to the incident at about 5pm and upon arrival at the site, we found the two men trapped under the rubble. We had to remove the concrete heap before the victims could be brought to safety," he said Sunday.

Azmi said the duo were seriously injured and rushed to Seberang Jaya Hospital for further treatment.

According to preliminary investigations, the two workers were in the midst of demolishing the wall when it gave way, collapsing on them.

"Earlier several other workers tried to extricate them but the concrete pieces were too heavy, ” he added. - Bernama 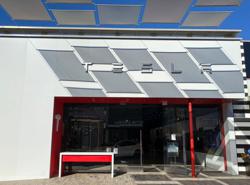