ALOR SETAR: Kedah police scored their biggest drug haul this year when they seized more than 100kg of various drugs worth more than RM18mil.

Five Thai nationals and two local men were also arrested during separate raids in Padang Terap and in other locations near the Malaysia-Thailand border.

He said police found 108,592g of what was believed to be heroin, with a street value of about RM18mil, in the boot of the car.

“The duo were detained and remanded for seven days until Dec 2 for further investigations.

“Preliminary investigation found that the drugs were meant for the market in the country, ” he added.

Comm Hasanuddin said following this initial arrest and with assistance of the General Operations Force (GOF), a few follow-up raids were launched at Hutan Situlang in the Padang Terap district on Thursday.

“During the raid at 6am, a blue Mitsubishi Pajero was found in the area and a 32-year-old local from Changlun and a 48-year-old Thai national from Yala, southern Thailand, were detained.

“In another raid at 10.30am in the same area, a 37-year-old local man from Kuala Nerang and a 36-year-old Thai national from Songkhla, southern Thailand, were detained in a white Mitsubishi Triton pick-up truck.

“During the last raid at 3pm in the same location, a 28-year-old Thai national from Pattani, southern Thailand, who acted suspiciously at one of the makeshift canvas tents in the area was arrested.

“There are many makeshift canvas tents in the area, which were probably used as a transit point for smugglers from the neighbouring country, ” he said during a press conference at the Padang Terap district police headquarters yesterday.

Comm Hasanuddin said the Hutan Situlang area fell under the responsibility of the armed forces and not the police.

“The area is a forest reserve and the location where the arrests were made is tightly guarded.

“The drugs were brought into the country from a neighbouring country and received by another party here before they were distributed nationwide, ” he said. 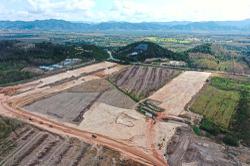