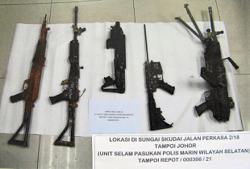 JOHOR BARU: Police have arrested three suspects, including a newly-minted Datuk in Kluang who were allegedly part of a syndicate offering fake investment schemes.

He said one of the suspects was a 40-year-old who had just received his datukship this month.

“We believe that the suspects, aged from 27 to 40, have been offering non-existent cryptocurrency and forex schemes to unsuspecting victims for the past two to three years.

“They lured their victims locally and from other countries including Singapore, Brunei and China by offering attractive returns within a short period of time.

The seized items amounted to RM4.6mil in total.

He added that the suspects have been remanded until Nov 27 for investigations under Section 420 of the Penal Code, which carries a jail term of not less than one year and not more than 10 years, caning and a fine, upon conviction.

Comm Ayob urged those who have invested in similar schemes to come forward to aid in police investigations.

Police are in the midst of identifying more syndicate members who are still at large, as well as possible victims, he said.

He also advised the public to be more careful and not to believe in investment schemes which appear too good to be true.

Those with information about the case can get in touch with the police via the Johor police hotline at 07-221 2999.