Six cops under probe over missing RM1.6mil during raid 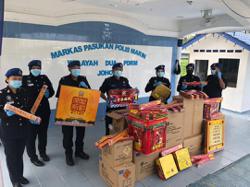 KUALA LUMPUR: Two police assistant superintendents and four policemen are being investigated over the “disappearance” of RM1.6mil in cash during a raid at an apartment unit in Bukit Segambut.

A team from the Sentul District Commercial Crime Investigation division carried out the raid on Nov 12 and arrested a married couple, both Chinese nationals, and two drivers. Cash and valuables were also seized in the operation.

Kuala Lumpur police chief Comm Datuk Saiful Azly Kamaruddin said the ASPs and policemen from the Sentul headquarters were detained on Tuesday in connection with an investigation into the claims of the missing funds.

“The case is classified under Section 380 of the Penal Code for theft in a building and Section 384 of the same code for extortion, ” he said. They have since been released on police bail, he added.

“We are looking at whether the standard operating procedure was followed during the raid, the most important of which is the recording of all seized items witnessed by the individuals checked or detained.

“The individuals will then sign a form listing all valuables seized to ensure nothing is lost, ” he said.

“JIPS will take action if those involved are proven guilty. They are not only facing action under the Penal Code but they could also be suspended or terminated, ” he added.

Comm Zamri said since 2016, action has been taken against about 6,000 police personnel and officers for various misconduct.

He said an average of about 1,200 personnel each year were penalised for committing various disciplinary infringements as well as criminal offences.

“However, I believe it is only just the tip of the iceberg as there are many others who have not been detected or reported.

“Among the top offences are absence from duties, failure to declare assets and having extra marital affairs. Disciplinary action taken ranged from suspension and salary reduction to job termination while for criminal offences, those involved were interdicted and dismissed from service upon conviction by the courts, ” he said.

“Others involved abuse of power which is tantamount to abetting criminals and criminal syndicates such as gambling and vice syndicates in not taking action against or busting them as the personnel and officers have been paid off.

“There was a recent case in Kulim where JIPS Bukit Aman raided several illegal gambling premises.

“The personnel there did not take action as they had been compromised and disciplinary action was taken against them, ” he said.