KUALA LUMPUR: Bukit Aman has deployed operations team from the CID and the Narcotic Crime Investigation Department (NCID) as well as additional armoured vehicles to the Malaysia-Thailand border following the attacks on the General Operations Force (GOF).

Inspector-General of Police Tan Sri Abdul Hamid Bador (pic) said the attacks have not dampened the spirit of the officers and personnel, who are posted at the area.

"Besides the Vat 69 commando unit, we have also deployed operations team from CID and NCID to the border to ensure that any movement by the smugglers will be curbed.

"Our fast actions yielded results when Kedah police managed to seize more than 100kg of heroin worth RM10mil on Wednesday," he said when contacted on Thursday (Nov 26).

The country's top cop said he was proud of the fighting spirit showed by the Senoi Praaq Battalion 3 personnel despite the attacks by the smugglers.

During the latest incident at about 6.15pm on Wednesday, a police personnel was suddenly shot while on duty at Post M16 at Bukit Kayu Hitam.

It is learnt that the personnel suffered a minor injury as the shot that was fired from the direction of a neighbouring country hit his bullet proof vest.

The personnel has since been sent to the hospital for further treatment. 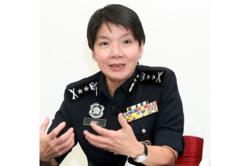