ALOR SETAR: A General Operations Force (GOF) member from Bukit Kayu Hitam was shot in the stomach, believed to be with an air rifle, while on duty at the Bukit Kayu Hitam GOF tactical base.

It is learnt that the shot, which came from across the border with Thailand, was fired by a male suspect wearing dark-coloured clothes near the security fence at around 6.15pm on Wednesday (Nov 25).

The GOF policeman, identified as Lans Korporal Muhammad Amirul Amir, 26, was wearing a bulletproof vest at that time, reported Bernama.

L/Kpl Amirul, is attached to the Company B Battalion 3 PGA Bidor.

He sustained an "abrasion of the skin on the abdomen".

A police report on the incident was lodged at the Bukit Kayu Hitam police station.

He is now warded at Sultanah Bahiyah Hospital in Alor Setar.

"His injury is not serious and he will receive normal treatment," he said.

The GOF is the light infantry arm of the police. 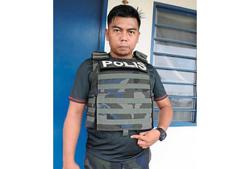