GEORGE TOWN: The Penang government is awaiting laboratory test results by the state Department of Environment (DOE) before taking further action on the oil spill that occurred in the waters near the Paramount fishing shed here, says Phee Boon Poh.

The Penang environment committee chairman said the state DOE has taken samples of the water on Tuesday (Nov 24) after receiving a report on the matter.

"DOE has taken the water and sludge samples from the beach for analysis. We are still awaiting the lab test results before taking further action.

"After receiving a report about the situation on Tuesday, we made an inquiry with the marine police and were told that there were no reports of oil spills recently.

"We are still investigating the issue but we believe that the oil spill happened at a spotted area only.

“We strongly believe that this could be internal spillage rather than oil spill in the sea as the beaches in Gurney Drive and Tanjung Tokong are not polluted.

"If the oil spill happened in the open sea, tidal flow would reach a larger area. We believe the spillage occurred in shallow waters.

“Due to the weaker hydro flow, the currents cannot carry the liquid away and thus it is pushed to the shore," he said in a phone interview on Wednesday (Nov 25).

It was reported that about two kilometres of coastline near the Paramount fishing shed in Jalan Sultan Ahmad Shah were polluted due to oil spill on Tuesday (Nov 24).

Bangsal Nelayan Paramount acting chairman R. Selvarraju, 63, said this was his first time seeing such black waters at the shore.

"We have not been able to go fishing in the water for the past 48 hours.

"We usually catch crabs and fish in the waters around 5km from the shore. Due to the oil spill, we could not go to the sea and we are worried that the fish and crabs nearby would have consumed the oil and be poisoned.

"Even if we catch any fish or crabs, the markets would not want our products as it is dangerous for human consumption.

"The oil has seeped through the sand and we believe that for the next one to two months, children cannot come and play at the beach," he said when met at the beach near the area on Wednesday.

Selvarraju added that there are about 30 fishermen there.

"We go out to the sea in a boat that can carry three fishermen. There are around 10 to 12 boats each day," he said.

"The Urban Services Department immediately went to the site to investigate. We have also contacted the Department of Environment and Irrigation and Drainage Department to inform them about the incident, ” he said.

He added that as a first step, MBPP beach contractors cleaned the beach areaa nd MBPP mayor Datuk Yew Tung Seang went down to the field with the Urban Services Department team and boarded a boat to survey the situation along the contaminated area on Tuesday.

"We still can't locate the culprit, but we will continue to monitor the situation. The situation has improved on Wednesday (Nov 25), with only a slight oil effect that can be seen on the coast but there is still the smell of oil," he said. 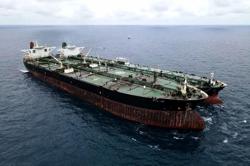