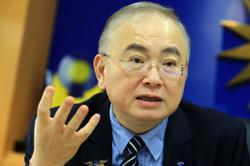 He said the ministry listed the “pros and cons” on the decision made by the Pakatan government to award the project to the company, and also the termination of the letter of consent in the Cabinet memorandum by the present government.

“When verifying the Cabinet minutes on the termination of the letter of consent on Sept 2, the ministry also took into account the Malaysian Anti-Corruption Commission’s views confirming that the procurement of the KVDT2 project did not follow government procurement procedures, ” Dr Wee said in his ministerial winding-up speech on Budget 2021.

He reminded his predecessor, Anthony Loke (PH-Seremban), that it was during his tenure as Transport minister that he informed the Cabinet on Sept 19,2018, that the KVDT2 project could cost less if it was done through open tender.

He said Loke then submitted a Cabinet Memorandum on July 5,2019, to award the KVDT2 project through direct negotiation to Syarikat Dhaya Maju LTAT Sdn Bhd (DM-LTAT).

He said Loke was also aware that Keretapi Tanah Melayu Bhd (KTMB) had written to his ministry and the Finance Ministry in July 2019, expressing concerns that the project was awarded to DM-LTAT through direct negotiation.

Dr Wee also clarified that the decision to terminate the contract with DM-LTAT in September this year was a collective decision made by the Cabinet.

“The decision to terminate the KVDT2 letter of consent, where the official project agreement has yet to be signed, is not the decision of a person named Wee Ka Siong, not me, but was made by the Cabinet after considering several inputs, including that of the Attorney General’s Chambers, ” he said.

He challenged Loke to repeat his accusations outside Parliament.

“I will certainly take legal action to clear my name, ” he said, adding that Loke should be mindful of his words and stop speaking like a representative of the company involved in the legal tussle.

Dr Wee said he had lodged a police report against the allegations made against him with regard to the project.

Earlier, Speaker Datuk Azhar Azizan Harun had to repeatedly ask Loke not to interrupt Dr Wee during the latter’s address.

Loke had accused Dr Wee of lying and misleading the House.

“Yang Berhormat, please calm down, if not you will get a heart attack, ” Azhar said in a reminder to Loke.

To this, Dr Wee retorted: “If there are any elements of lying, I will resign my post.”

In 2017, the Barisan Nasional administration awarded the project to DM-LTAT but the contract was cancelled following the change of government in May 2018.

The Pakatan government, however, decided to award the project to DM-LTAT after a reduction in its scope and costs.

DM-LTAT filed a suit against the present government after the government decided to terminate the contract with the company and re-tender the project this year.

On Nov 6, Minister in the Prime Minister’s Department Datuk Takiyuddin Hassan said the government was seeking an out-of-court settlement with DM-LTAT.