KOTA KINABALU: Two alleged drug dealers have been arrested by security forces during anti-crime and operations to check on illegal immigrants in Semporna.

The duo, both foreigners aged 27 and 30, were detained in waters around Sigalong at about 4pm on Monday (Nov 23).

He said they pursued the vessel and intercepted it.

“The two had no valid identification documents. A plastic packet containing what is suspected to be syabu was found on them,” he said on Tuesday (Nov 24).

DCP Fuad said the police seized the boat, engine, some petrol and handphones valued about RM14,614 as well as RM144 in cash.

"The two believed to be selling drugs to local addicts in Semporna.

"They are being investigated for possessing and trafficking drugs under the Dangerous Drugs Act 1952," he said.

DCP Fuad called on the maritime community in the east coast to continue to be the eyes and ears of security forces in efforts to check criminal activities.

He urged them to call Esscom at 089-863 181 or inform the nearest police station if they have information on crime in their vicinity.

Over the past week, localised crime groups have been committing sea robberies in waters off Lahad Datu, Kunak and also Tawau and Esscom has stepped up operations to arrest them. 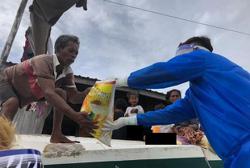