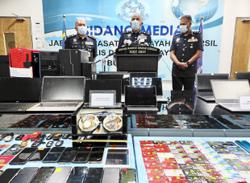 KUALA LUMPUR: The police have crippled a bogus investment scheme syndicate with the arrest of 10 suspects.

"We received 72 police reports and opened 28 investigation papers involving losses of about RM20.52mil.

"Our investigations revealed the mastermind had hired agents to find investors. They promised returns of between 5% and 8% to victims," he told reporters at the Federal CCID headquarters on Monday (Nov 23).

"The mastermind in his 40s and his Indonesian girlfriend were arrested in a luxury condominium at Shah Alam," he said, adding that all the suspects were remanded for five days to assist further investigations.