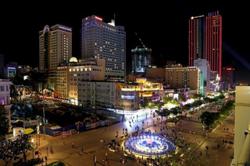 LABUAN: A total of RM760,000 has been allocated to Labuan by the Tourism, Arts and Culture Ministry for the maintenance, refurbishment and repair of tourism infrastructure and facilities.

From that sum, RM120,000 will be spent on small development projects, including replacement of the five-year-old tourism billboards and the rural painting at Labuan Airport, said Labuan Corporation chief executive officer Dr Fary Akmal Osman.

The remaining RM640,000 is for upgrading tourism infrastructure at Anjung Budaya, Marine Museum and the sunset-viewing spot of Selera Manikar.

“Anjung Budaya must be upgraded as we use the building for various cultural events.

“At the Marine Museum, the air-conditioners and electricity wiring need to be replaced/repaired.

“The structure at Selera Manikar also needs refurbishment, ” she told reporters after a visit to the airport yesterday.

Fary also said road and trail or hiking signages, for example, to Labuan Chimney and Gedung Ubat would also be upgraded with part of the RM120,000 allocation.

The two places top tourist attractions and are winners of the International Green Apple Awards for Environmental Best Practice and Sustainable Development 2013.

The Gedung Ubat or Ammunition Store is believed to have been a storage area for artillery and explosives by the Japanese army during World War II.

The monument known as Chimney is a unique historical landmark in Labuan.

The red brick tower is better known among locals as “punil” and is believed to have been built in early 1900.

“This is part of our efforts to revive the domestic tourism sector that has been badly hit by the Covid-19 pandemic. Our focus now is to revive economic activities through tourism and the small and medium industries, ” she added. — Bernama