A delightful Deepavali despite it all

In high spirits: Mohana and his family lighting up the Kuthu Vilakkuat at his apartment in Solok Rawana on the first day of Deepavali. — LIM BENG TATT/The Star

GEORGE TOWN: For the family of M. Mohana Sundaram, this Deepavali celebration is all about putting health as a priority.

“We have to face the fact that the most important matter is not about how grand Deepavali is, but how well we take care of our health.

“Deepavali will come again next year and the year after that, but if we are not healthy now, we cannot enjoy it in the future, ” said Mohana.

The 50-year-old, who works as a newspaper deliveryman, had hand sanitisers and face masks ready for anyone coming to his home in Solok Rawana.

“Previously, I would have a lot of friends coming on the first day but this year, I told them to postpone their visit until everything is back to normal, ” he said.

He said he only received visits from his daughter and sister, who live nearby.

Mohana lives with his wife S. Nageswari Naidu, 48, his mother R. Kuppulismy, 73, and three daughters aged between 13 and 22. 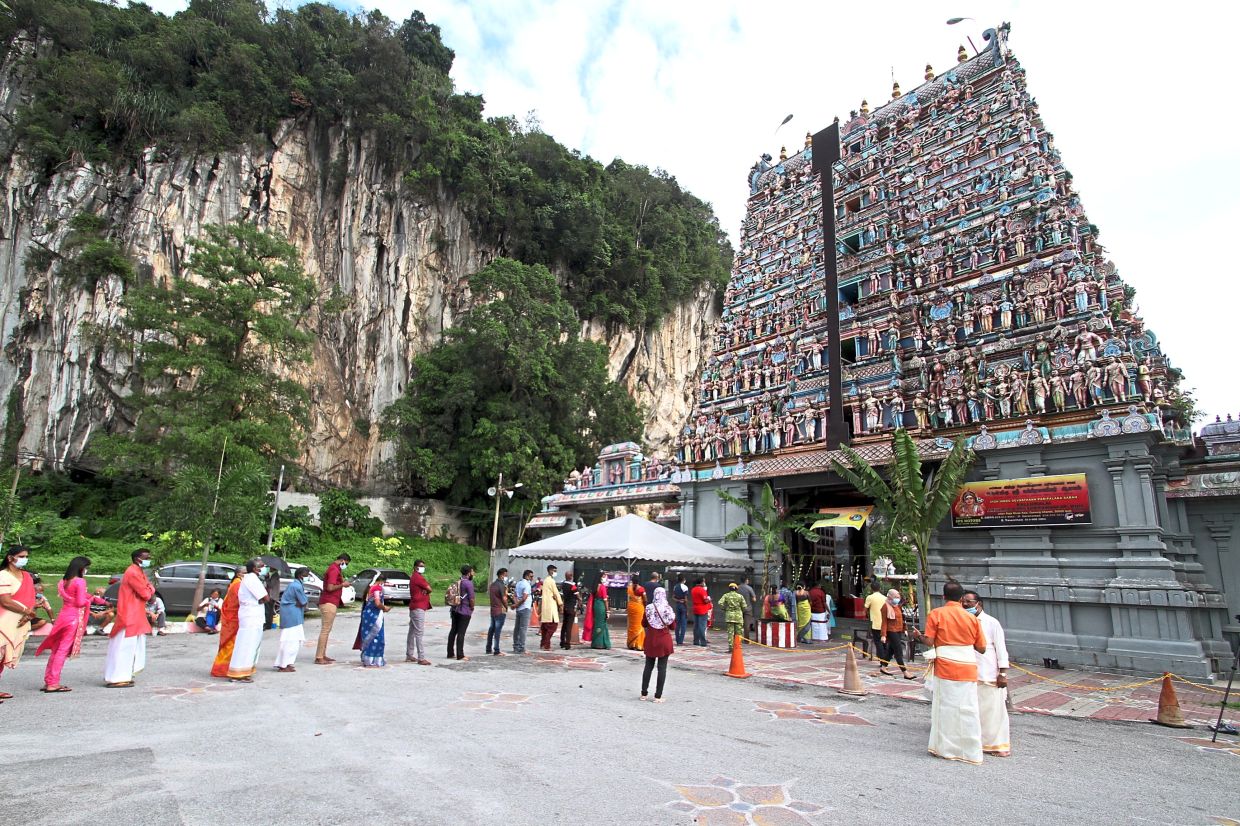 Taking turns: Devotees queuing outside the entrance of the Kallumalai Arulmigu Subramaniar Temple at Gunung Cheroh, Ipoh, on Deepavali. Under the SOP, only 30 people are permitted to conduct prayers inside temples at any one time. — RONNIE CHIN/The Star

His eldest daughter, 26, is married and lives with her own family at the police quarters in Bandar Baru Ayer Itam.

Mohana’s brother-in-law R. Pratahab, 36, said he cancelled plans to return to his hometown in Sitiawan for Deepavali.

“We only celebrate with close family members in Penang, ” he said.

A check by The Star found that roads near Little India and nearby temples were almost deserted.

Temples that were usually packed with devotees were nearly empty.

A limited number of people was seen at the prayer halls.

“The temple was not busy. There were fewer than 10 people including us, ” she said.

“We still can celebrate in our own small way without losing the spirit of Deepavali. And we just have to make sure we are safe, ” she said.