Esscom seizes 3,500 contraband cigarettes worth over RM50k in Sandakan KOTA KINABALU: The Eastern Sabah Security Command (Esscom) has seized 3,500 packs of contraband cigarettes worth over RM52,500 in Sandakan.

The stash, which was hidden inside an empty house in Kampung Mangkalinau, Sandakan, was discovered at 2.30am on Saturday morning (Nov 14) by a team from the General Operation Force's Battalion 15 Tiger Platoon.

Efforts are ongoing to track those involved.

"The GOF members found seven boxes containing the cigarettes, believed to be from a neighbouring country.

"We believe the cigarettes were being smuggled into this district for the local market," he said in a statement on Saturday.

The confiscated items were taken to the Sandakan police station for further action and the case will be investigated under Section 135 (d) of Customs Act 1967 (penalty for various smuggling offences). 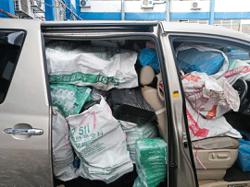