Tengku Zafrul said the tax relief limit for medical treatment for serious illnesses would be increased from RM6,000 to RM8,000 for the individual taxpayer, spouse and child.

He added that the tax relief for a full health screening would be increased from RM500 to RM1,000.

"The tax relief on expenses for medical treatment, special needs and parental care will also be raised from RM5,000 to RM8,000," he said during the tabling of the Budget 2021 in parliament on Friday (Nov 6).

Tengku Zafrul added that to encourage Malaysians to get preventive vaccinations to curb the spread of diseases, the government would also expand the scope of tax exemption for the medical treatment covering vaccination expenses such as pneumococcal, influenza and Covid-19.

He also said tax exemption would be given for the vaccination cost for personal, spouse and children with a limit up to RM1,000.

During the Covid-19 pandemic, Tengku Zafrul said that the government received feedback that mental issues was among the serious issues faced by the public.

As such, he said an allocation of RM24mil would be allocated to handle the issue to Mental Health programmes, Violence and Abused prevention, and substance abuse, adding that the health ministry's psychosocial support line received over 35,000 calls between March and Oct 2020, with many complaining about stress, anxiety and depression.

Tengku Zafrul also said the government would implement a pneumococcal immunisation programme for children with an allocation of RM90mil which is expected to benefit 500,000 children.

"RM6mil will also be allocated for the procurement of biological drugs for various types of rheumatological diseases such as rheumatoid arthritis.

"The goverment will allocate RM25mil for the Peritoneal Dialysis treatment programme at home aims to improve the quality of patient treatment of kidneys as well as reducing waiting time and congestion at hospitals," he said. 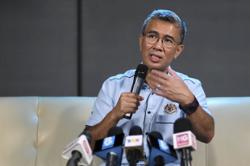