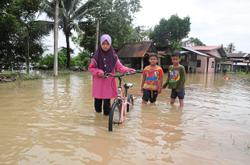 SEREMBAN (Bernama): A total of 420 people from 84 families in seven villages here were evacuated to a temporary relief centre after their houses were inundated by up to two metres of flood waters following heavy rain Tuesday (Nov 3) night.

"All the evacuees are currently housed at the temporary relief centre at SK Sega Hilir which has been opened since 7.30am Wednesday (Nov 4), ” he told Bernama when contacted.

He said 40 civil defence members were mobilised for the evacuation operation after receiving reports of the floods at 12.45am Tuesday.

"The floodwater is subsiding and the situation is under control for now, ” he added.

Meanwhile, officer-in-charge of the Seremban Fire and Rescue station Mohamad Idris told Bernama that a man was reported missing, believed to have been washed away by strong currents from the overflow near the river in Jalan Rasah, Taman Happy, at 1.30am Tuesday.

"Twenty flood victims from the area were evacuated, but the man was washed away by strong currents. The search for the man is still ongoing, ” he said. - Bernama