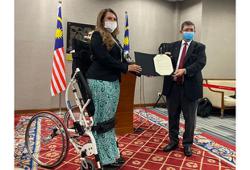 KOTA BARU (Bernama): The ex-husband of cosmetic millionairess Datuk Seri Dr Hasmiza Othman, 49, popularly known as Datuk Seri Vida (pic), has filed for custody of their two children, claiming that he had not met them for almost two years.

Mohd Amin Yasin, 42, who is a businessman, filed the suit last Oct 21 and the matter came up for case management on Tuesday (Nov 3) before Syariah High Court judge Datuk Abu Bakar Abdullah Kutti.

Mohd Amin and Hasmiza got married in 2000 and the marriage lasted for about eight years, during which they were blessed with four children -- Nur Edlynn Zamileen, Muhammad Eric Zecquan, Muhammad Eddie Zuhdie and Muhammad Edrie Zikri.

However, Muhammad Eddie Zuhdie and Muhammad Edrie Zikri perished when the family home in Ipoh, Perak, caught fire in 2013.

Lawyer Mohd Zaki Zainal Abidin, representing Mohd Amin, when met by reporters, said his client was only seeking for visitation rights and had no intention of seeking full custody of the children.

"My client has not seen the children for almost two years,” he said.

He said the court set Nov 25 for mention and ordered both parties, as well as Nur Edlynn Zamileen (CikB) 15, and Muhammad Eric Zecquan (Kacak), 13, to be present on that day. - Bernama