SHAH ALAM: There was some minor drama at the Selangor legislative sitting on Monday (Nov 2) when five Opposition assemblymen came dressed in Baju Melayu and songkok.

Speaker Ng Suee Lim (pic) reminded the five that according to the rules of the House, they had to be in lounge suits and not traditional costumes, which is only allowed on Fridays.

“Please adhere to the standing orders of the House," said Ng, adding that he was merely advising them to dress correctly for the assembly.

Later in the day, Ng told a press conference that the five assemblymen had intentionally worn the national costume to stir up controversy.

"They had planned this beforehand to gain political mileage. Because I questioned them about it, they will make claims that I am a racist who does not allow the wearing of the Baju Melayu," said Ng.

He said his concern was mainly the need to uphold House rules.

Ng added he had also reprimanded Amanah's Taman Templer assemblyman Mohd Sany Hamzan for using the Baju Melayu on a non-Friday before.

Ng said the Opposition should not stoop so low to use petty issues to stoke up racial and religious sentiments.

"I am disappointed with such irresponsible conduct. It is immature to use petty issues to attack," he said.

He added he has been a politician long enough to know that elected representatives "can silat, kungfu or muay thai" in the political arena but there was a right way to do it.

"If varied dressing was allowed, the assembly will become a fashion show," said Ng, adding that no action would be initiated against the five.

Meanwhile, Rizam admitted he and the four other assemblymen had planned to come to the state assembly in traditional costume.

"We are debating the budget that was tabled by the mentri besar and we thought since it is an important day, why not come in Baju Melayu?" said Rizam.

He added they would all be coming in lounge suits from Tuesday (Nov 3) onwards. 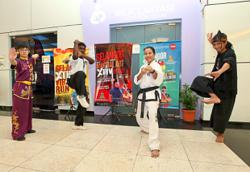