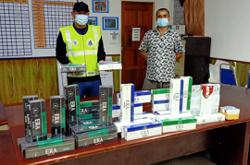 PETALING JAYA: The fight against Covid-19 in Sabah received a huge boost as two military aircraft were deployed to deliver 13 tonnes of critical equipment and supplies.

Yesterday, Prime Minister Tan Sri Muhyiddin Yassin inspected the preparations at the Royal Malaysian Air Force (RMAF) airbase in Subang for the delivery of supplies that would also include Sarawak.

Muhyiddin expressed his gratitude to RMAF personnel and other agencies on the front line in the battle to contain the virus.

According to the Health Ministry, an Airbus A400M military transporter departed from the airbase at 10am for Kuching, Tawau and Kota Kinabalu, while a C-130 Hercules transport aircraft left half an hour later for Kota Kinabalu and Labuan.

All the items came from the ministry, Plantation Industries and Commodities Ministry, Defence Ministry, Yayasan Amal Malaysia and Sunway Healthcare.

The C-130H aircraft carried five tonnes of supplies such as PPE, face shields and coveralls from the Health Ministry.

With Sabah being the hardest-hit state in the third wave of the pandemic in Malaysia, RMAF undertook 17 flights between March 22 and Oct 27 to deliver over 433 tonnes of aid, medical equipment and other critical supplies to Sabah and Sarawak.

In October, RMAF helped fly 471 biological samples from Labuan, Kota Kinabalu and Tawau to be tested in labs in the peninsula.

“RMAF also sent 68 health workers over to Tawau to help with the field hospital while 151 staff from the Health Ministry’s mobilisation team have been deployed in Tawau and Kota Kinabalu, ” it added.

“It is worrying to read about our brothers and sisters in Sabah, ” said Lew.

“Many have messaged and asked me to help. So we are sending medical supplies there, ” he said in a Facebook post yesterday, adding that the items included PPE such as protective glasses, face shields, face masks and shoe covers.