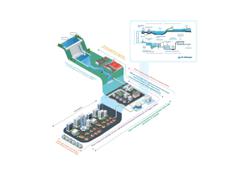 Getting stricter: Amirudin said among the initiatives were amendments to the Luas enactment to increase the penalty for water source pollution.

SHAH ALAM: The Selangor government has set aside RM200mil of its 2021 budget for initiatives to counter the repeated river contamination and abrupt water supply disruptions in the state.

Through Luas, he said the state government would also enforce the implementation of effluents released based on the Total Maximum Daily Load (TMDL) in tandem with the river’s carrying capacity.

He said a biological/bioremediation treatment pioneer project to protect the water quality in Sungai Gong with the use of nano technology and raw water treatment system would also be put into place.

“This pioneer project will also be replicated at Sungai Sembah, Sungai Beranang and Sungai Buah.

“The Selangor government, Luas and Air Selangor have identified these three rivers as the main sources that contaminate Sungai Selangor and Sungai Langat, ’’ said Amirudin when tabling the state Budget.

Yesterday, Amirudin tabled a deficit state budget of RM2.323bil for 2021.

Out of this, 53% or RM1.22bil will go towards administrative costs while the remaining 47% or RM1.103bil will be for development expenses.

According to Amirudin, the state’s projection of its 2021 earnings was RM2.2bil, with RM1.03bil coming from land premiums.

The second biggest contributor is quit rent, which is estimated to rake in RM545.84mil, followed by a federal allocation of RM206.85mil.

“Taking into consideration that the estimated state revenue is RM2.2bil and the projected expenses is RM2.323bil, the state’s 2021 budget will have a deficit of RM123mil, ” said Amirudin.

“The deficit is, however, lower than the 2020 deficit projection of RM133mil.”

Amirudin’s third budget since he took over as Mentri Besar from Datuk Seri Azmin Ali will also see a reduction in entertainment tax from the current 25% to 15% from Jan 1.

The move, he added, was to help local entertainers who had suffered economically due to the Covid-19 pandemic.

Other measures under the state Budget include injecting RM100mil into the state’s Selangor Innovation Fund to grant venture capital investment to technology start-ups.

Later, Amirudin told reporters that nanotechnology would be used to counter and dilute pollution found in water sources under the 2021 budget.

“It is what we call pre-treatment of the river itself and some of the raw water reservoirs.

“As we pump raw water from our reservoir into the river, we will divert the polluted water to other directions to make sure that it does not flow into the water treatment plants, ’’ he said, adding that the contaminated water would be diverted into the sea.