North Seberang Perai OCPD Asst Comm Noorzainy Mohd Noor said the youths, aged between 17 and 20, were fined in two separate locations during the SOP compliance operation in the district.

He said in the first location at about 2.15am, 18 youths, including a food stall worker near Taman Seri Serdang, Kepala Batas, were slapped with RM1,000 compounds each after they failed to adhere to the SOP advised by the Health Ministry.

"They were not following SOP such as adhering to physical distancing and did not record their name in the register book before entering the food stall.

"The worker at the food stall was also fined after he failed to record the body temperature of his patrons," he said in a statement on Oct 30 (Friday).

ACP Noorzainy said in the other raid, at about 2.30am, two youths, aged 17 and 19, were fined RM1,000 each at the roadside of Jalan Seri Serdang, Kepala Batas, for not wearing face masks outside their homes.

He said the youths were fined under Regulation 10(8) of the Prevention and Control of Infectious Disease Regulations 2020.

"Police will continue to conduct operations of SOP compliance in effort to break the chain of Covid-19," he said.

He also hoped that the community in the district will be responsible by adhering to all SOPs that have been set by the government. 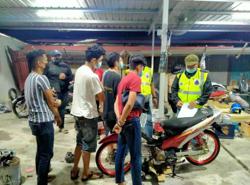 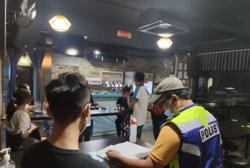