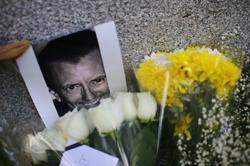 PETALING JAYA: Former prime minister Tun Dr Mahathir Mohamad has said that he is disgusted by the attempts to misrepresent what he wrote in his blog, which was reproduced on his Twitter and Facebook accounts.

In a blog post on Friday (Oct 30), the Langkawi MP said he should have been given the opportunity to explain his social media posts on recent violence in France before they were taken down.

1. I am indeed disgusted with attempts to misrepresent and take out of context what I wrote on my blog yesterday.

2. Those who did that highlighted only one part of paragraph 12 which read: “Muslims have a right to be angry and to kill millions of French people for the massacres of the past.”

3. They stopped there and implied that I am promoting the massacre of the French.

4. If they had read the posting in its entirety and especially the subsequent sentence which read: “But by and large the Muslims have not applied the “eye for an eye” law. Muslims don’t. The French shouldn’t. Instead the French should teach their people to respect other people’s feelings.

5. Because of the spin and out of context presentation by those that picked up my posting, reports were made against me and I am accused of promoting violence etc... on Facebook and Twitter.

6. FB and Twitter had then requested the administrators of my Facebook and Twitter accounts to remove the postings. Despite attempts to explain the context of the posting, they were removed.

7. There is nothing I can do with FB and Twitter’s decision to remove my posting. To my mind, since they are the purveyor of freedom of speech, they must at least allow me to explain and defend my position.

8. But that is what freedom of speech is to them. On the one hand, they defended those who chose to display offending caricatures of Prophet Muhammad S.A.W. and expect all Muslims to swallow it in the name of freedom of speech and expression. On the other, they deleted deliberately that Muslims had never sought revenge for the injustice against them in the past.

9. Even my appeal that the French should explain the need to advise their people to be sensitive and respect the beliefs of other people is left out.

10. What is promoted by these reaction to my article is to stir French hatred for Muslims.