SEREMBAN (Bernama): The preliminary analysis of samples taken from the location of the source of pollution in Sungai Batang Benar, Nilai, has found that it was due to an organic compound known as dimethyl disulfide.

Negri Sembilan Health, Environment, Cooperatives and Consumerism Action Committee chairman S. Veerapan (pic) said the result, obtained last Saturday, was from the analysis of five soil samples taken in the bush area near an industrial area at Jalan Emas, Nilai Industrial Area, which was the source of pollution in the river.

He said dimethyl disulfide is an organic compound that is commonly used as an additive in the food industry and also used as a catalyst in the petrochemical industry.

"Although information has been obtained from the investigation that was conducted, the Negri Sembilan Department of Environment (DOE) is still examining all the facts of the case before a conclusion can be made," he said when contacted by Bernama here Thursday (Oct 29).

He said this when asked on the investigation that was conducted to determine the cause of the pollution which resulted in the operation of two water treatment plants in Sungai Semenyih and Bukit Tampoi in Selangor to be suspended.

Last Oct 5, the Environment and Water Ministry, in a statement, said that a bush area in Jalan Emas, near the Nilai Industrial Area was found to be the main location of the waste that caused the pollution in Sungai Batang Benar.

Following that, three men, in their 30s to 40s, were arrested in Kota Baru, Kelantan, for investigation under Section 430 of the Penal Code. 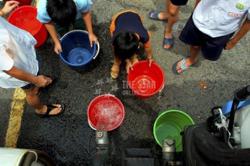 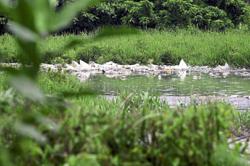