PETALING JAYA: The chargé d'affaires of the French Embassy in Kuala Lumpur has been called in by Wisma Putra as Malaysia wishes to address the "growing hostilities, hate speech and defamation of Islam".

This comes amidst outrage over controversial cartoons of the Prophet Muhammad recently shown in a school in France.

In a statement, the Foreign Affairs Ministry said that it had summoned the chargé d'affaires so that it could express Malaysia's concerns on the matter.

"During the meeting, the Ministry reiterated Malaysia's position to strongly condemn any inflammatory rhetoric and provocative acts that seek to defame the religion of Islam as the world has recently witnessed in the forms of populist speeches and publication of profane caricatures depicting the Prophet Muhammad.

"Malaysia is of the view that such elevated tension does not bode well for the peaceful co-existence of all religions," Wisma Putra said in a statement on Wednesday (Oct 28).

The Ministry added that Malaysia is committed to upholding the freedom of speech and expression as fundamental human rights, so long as these rights are exercised with respect and responsibility.

"Malaysia also underscores the importance of initiatives to curtail and eliminate Islamophobia at all levels.

"To this end, Malaysia will continue to work with the international community to promote mutual respect among religions and prevent religious extremism," it added. 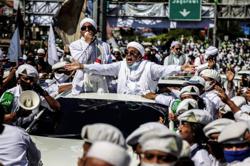