IPOH: A man was found dead in a car at the Tapah Rest and Relax (R&R) Stop (southbound).

A Perak Fire and Rescue Department spokesperson said they were alerted at 11.30am yesterday that the victim was locked in a Honda Jazz vehicle.

“A team from the Tapah Fire and Rescue Station arrived at the scene and found that the car engine was not running, ” he said in a statement.

“With the help of special tools the victim was removed from the car but he was confirmed dead by a health team, ” he said, adding that the victim was identified as Ng Kar Weng, aged 26.

The rescue operation ended at 12.12pm and the body was handed over to the police for further action.

Meanwhile, Tapah district police chief, Supt Wan Azharuddin Wan Ismail said inspection of the car found that a pot of charcoal on the floorboard at the back had caught fire.

“Upon questioning the victim’s father, it was found that the victim who was still single and worked as a car painter, lived alone at a condominium in Menglembu, Ipoh, and did not share any of his problems with his family, ” he said.

Wan Azharuddin added there were no injuries or criminal elements in the incident, and the case had been classified as sudden death. — Bernama 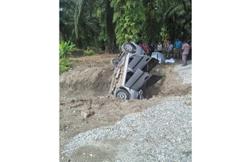