JOHOR BARU: The state government should loosen its purse strings and dig into its reserves to help more people affected by the Covid-19 pandemic, says the Johor Umno treasurer.

Datuk Md Jais Sarday (pic) said the state had cash reserves of up to RM3bil.

“Now is the time to start spending the money to help the unemployed, schoolchildren and university students, ” he said in urging Mentri Besar Datuk Hasni Mohammad to provide more assistance to the people.

He said although the state government was doing a lot to help the people affected by the pandemic, more needed to be done.

“We have conveyed our suggestions to the Mentri Besar during our Umno division leaders meeting on Saturday, ” he said, adding that it was meaningless to accumulate huge reserves in fixed deposits when the people are suffering.

He suggested that the state, through selected banks, provide loans to small businesses, citing the action of the previous Barisan Nasional state government in helping people get loans to purchase houses in Johor.

“During my time in the state government, we parked some RM100mil with Ambank to provide housing loans for Johoreans, ” he said, pointing out that the bank provided loans of up to RM300mil to benefit many.

Md Jais, the previous state exco for housing and local government, said Johor could team up with another financial institution to provide business loans of up to RM100mil.

He said the Johor government, which was being led by Umno, should set an example for other states to emulate.

On the meeting, Md Jais said the leaders of all 26 Umno divisions in the state expressed concern over the prolonged negative impact caused by the pandemic.

He said the border with Singapore should be reopened.

“How long is the Federal Government going to keep the borders closed? Unemployment is on the rise and people need jobs to feed their families here, ” he added. 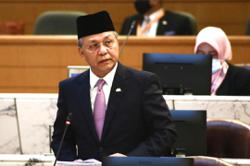