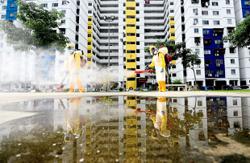 KUALA LUMPUR (Bernama): The police have detected the actions of some workers who abused the letters of consent from their employers to move about without logical excuses on weekends during the conditional movement control order (MCO) which came into effect on Oct 14.

He said there were service sectors which only operated on normal days, but some employees were found to be taking advantage of the situation by using the letters of consent to get past road blocks on weekends for personal purposes and without logical reasons.

‘’There were also some workers who made copies of the letters for their colleagues, but it is not possible that they are all working at the same time on non-working days.

‘’In addition, a more careful and frequent inspection will also be done on the service sector such as courier delivery service, ’’ he told reporters after monitoring on the compliance of the CMCO at several road blocks in the district of Sentul, today.

Shanmugamoorthy said the police also detected several individuals who gave the excuse that they wanted to deliver packages or items by furnishing the related documents but further inspections showed that they were actually moving empty-handed.

‘’So, if prior to this, only compounds or warnings were given to those who flouted the conditional MCO, this time the same actions will be taken against their employers.

‘’I urge the public not to take advantage by trying to pull the wool over the eyes of the enforcement authorities for personal purposes, in our effort to curb the spread of the COVID-19 pandemic, ’’ he said. - Bernama