BUTTERWORTH: The police here have slapped 16 men with RM1,000 compounds each for violating the recovery movement control order (MCO) here.

North Seberang Prai OCPD Asst Comm Noorzainy Mohd Noor said the men, aged between 23 and 55, were fined during an operation to ensure standard operating procedure (SOP) compliance in the district on Friday (Oct 23) at about 10pm.

"All of them were waiting for their ketum supplier at an empty hut located within a public market at Jalan Telaga Air Butterworth," he said when contacted.

ACP Noorzainy said their ketum supplier had not arrived when the police appeared.

The officers at the scene found that the men had committed various offences, he said, like not recording their names and body temperature before entering the public market.

Action was taken against them in accordance with Regulation 10(8) of the Prevention and Control of Infectious Disease Regulations 2020.

"Their body temperature also has been taken and all were recorded to be at a normal level during the operation," he said. 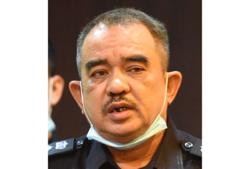