The boxes containing cartons of smuggled cigarettes aboard the vessel intercepted by Sandakan Malaysian Maritime Enforcement Agency on Wednesday.

KOTA KINABALU: The attempt by six illegal immigrants to smuggle in 19,900 cartons of contraband cigarettes failed when their boat was intercepted near Pulau Tetabuan waters off Sabah’s east coast on Wednesday (Oct 21).

A team from Sandakan Malaysian Maritime Enforcement Agency (MMEA) detained the men and confiscated the goods and vessel at around 2pm while on patrol under Ops Benteng.

Sandakan Maritime Zone director Captain Zainudin Mohd Zuki said the estimated value of the seized cigarettes was RM1.99mil sans tax, while the tax value would be around RM2.825mil.

“During the incident, the MMEA patrol boat came upon a suspicious local fishing boat and stopped it to inspect.

“Upon inspection, they discovered 398 boxes filled with 19,900 cartons of the contraband cigarettes.

“The six crew members, including the skipper, aged 20 to 54, are believed to be Filipinos. They were detained as they also failed to provide valid identification and because the boat licence has expired,” Zainudin said in a statement on Thursday (Oct 22).

The total seizure including the vessel was estimated around RM4.86mil.

He added that Covid-19 screening found one of the suspects to be positive with the virus and he had been admitted to the hospital.

The five others who tested negative were isolated and quarantined in lockup.

Zainudin also asked the public to provide information on illegal immigrant activities via the National Task Force (NTF) hotline at 011-6251 1223. 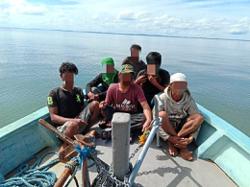