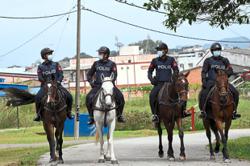 JOHOR BARU: A notice posted on the Johor police Facebook page has left many, including state representatives, wondering if a general election will be held soon.

This comes after the notice, which was posted on Thursday (Oct 22), informing the public here not to be alarmed with police preparation for the 15th General Election (GE15).

Comm Ayob downplayed the notice, saying that the activity was part of police training and to make sure their assets were well maintained and in working order.

“After the training, I have been receiving calls from assemblymen and MPs in the state asking me if there will be a general election soon, but what we have conducted is only a training preparation.

“I wanted to ensure that all Federal Reserve Unit (FRU) vehicles and equipment are well maintained and are ready to be deployed when needed.

“I just like to be prepared and not be caught off guard in case anything happens, ” he said in a press conference here on Thursday (Oct 22).

He added that aside from the FRUs, the training also involved personnel from the General Operations Force (PGA) and Public Order and Riot Unit (PORU) involving 105 personnel from various ranks.

“The training is held between 8.30am and 10am, involving 10 vehicles consisting of FRU buses and water cannon trucks.

Comm Ayob added that to date, a total of 3,000 police personnel have undergone training in crowd control in the event of any rioting incident or protest in the state.

“Those who are planning to hold any demonstrations must also apply for a permit from the police with at least a five-day notice, and we will decide where they can rally.

“Failure to do so will be met with stern actions from the police, especially under the current recovery movement control order (MCO), ” he added.