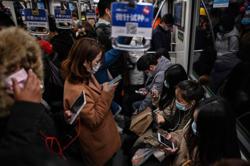 A MAN in China who went on a blind date was shocked when asked to foot a dinner bill totalling 19,800 yuan (RM12,292) for his date along with her 23 family members, reported China Press.

According to the report, the man and woman were introduced by family members and had agreed to go on a matchmaking date.

Even though he agreed to pay for the woman’s chaperone to the date, he did not expect her to bring nearly two dozen of her relatives.

When the man saw the bill, he left the restaurant, leaving the woman to pay.

When she asked her relatives to split the bill, they refused.

“Isn’t it supposed to be the man’s responsibility to pay for a matchmaking date?” one of them was quoted as saying in the article.

The woman posted on Weibo screengrabs of her exchanges with her relatives, one of which showed her calling herself “the victim”.

> A man from Shanghai was arrested for killing and eating a pair of swan geese after he deemed them “too noisy”, reported Sin Chew Daily.

The suspect was reported to have gone to a lake near his house at 3am on Oct 10 after a drunken night out.

He apparently encountered two swan geese at the lake but was annoyed at how noisy they were.

Frustrated that they would not shut up, he reportedly killed them and brought them home.

He gave one of the swan geese to his friend while the other one ended up in his soup pot. He was later arrested by the police.

> Chinese singer Wang Zheng snapped after enduring four years of her husband’s affairs and posted on Weibo photos of him in the nude while making video calls to another woman, reported Sin Chew Daily.

The 40-year-old made a long post on Weibo on Monday about her ordeal and posted multiple photos of her husband’s chats with a much younger woman.

She found out about the affair back in 2016 but decided to keep mum for her child’s sake.

“I thought it would end in a few months. Little did I know it’s now been four years. Even with the pandemic going and that one is in China while the other in the United States, they could still keep on a long-distance relationship, ” Wang said.

She admitted that it was the last straw when her husband bought plane tickets to the United States to visit his mistress and she decided to call him out on his behaviour online.