TAPAH: Three people died in a two-car crash on KM88 of Jalan Ipoh-Kuala Lumpur near here on Sunday morning (Oct 18).

Tapah OCPD Supt Wan Azharuddin Wan Ismail said the victims had been identified as Mohamed Tahir Junus, 64, and his wife Nor Aini Mohd Sam, 56, as well as the driver of another car Muhammad Ridhwan Ismail, 22.

He said in the 11.40am incident, the couple from Tanjung Malim died on the spot, while Ridhwan, from Teluk Intan, died on the way to the Slim River Hospital.

“Initial investigations showed that Ridhwan, who was heading toward Teluk Intan from Subang Jaya, lost control of his Myvi, swerved into the opposite lane and crashed head-on with the other vehicle.

“The impact caused ther instant death of the couple in their Proton Saga, ” he added.

He said both the vehicles were badly damaged at the front. 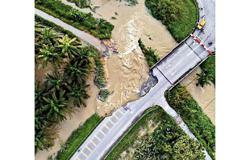