He added there was some flooding and small mishaps in Kuala Selangor, while Kuala Langat, Sepang, Klang and Sabak Bernam did not record any untoward incidents.

He added that an evacuation centre had been prepared and kept on stand-by at SK Tambak Jawa in the event there was a need to move residents.

“Other areas in Kuala Selangor only saw very little flooding when sea water flowed out of bunds and forts. The bunds at the seafront were all in a good and stable condition," said Muhammad.

He added the other four Selangor shorelines only saw a little flooding, which quickly receded, and that all beachfront bunds in the four locations were also in good and stable condition. 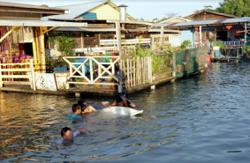