MELAKA: A 67-year-old scrap collector perished while attempting to save two of his pet dogs during a blaze at Kampung Limbongan here on Friday (Oct 16).

The victim, identified as Ong Cheng Seng, was believed to have rushed back into the burning house to rescue his dogs.

Sadly, he died after getting trapped in the fire himself.

Melaka Fire and Rescue Department Zone One Chief Mohd Khairul Nizam Mohamad Anuar said a distress call was received at about 6.40am.

He said from the preliminary findings, Ong had re-entered his house to save the dogs before he perished.

Mohd Khairul said his team discovered the charred remains in the kitchen of the house.

The fire also gutted a car that belonged to a neighbour.

One of the neighbours, who declined to be identified, said the victim was living alone at the house after his divorce a few years ago. 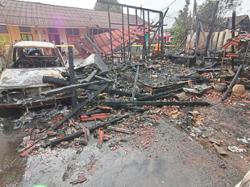