Man, 61, detained over illegal possession of diesel in Kanowit SIBU: A 61-year-old man has been arrested in Kanowit on Thursday (Oct 15) for allegedly illegally possessing 2,900 litres of diesel.

According to Sibu Domestic Trade and Consumer Affairs chief Kelyn Bolhassan, the suspect was caught at a petrol kiosk with several jerry cans filled with diesel which were placed at the back of his lorry.

"The suspect failed to furnish any document to prove that he had the permit to own such a large quantity of diesel, a controlled item," he said.

He was subsequently detained for investigation under Section 21 of the Supply Control Act 1961.

"We have also seized his lorry and both items were worth RM24,901," added Kelyn.

The offence provides for a fine of RM1mil for individual offenders and RM2mil for companies if convicted in court.

Action would also be taken against the operator of the petrol kiosk for selling the diesel in such a large quantity to the suspect, he added.

“Stern action would be taken against them if they are caught," he warned.

Meanwhile, he said that people who want to provide information or complaints against errant traders could do so through various channels including the ministry email at e-aduan@kpdnhep.gov.my or call 084-335622. 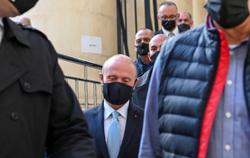