JOHOR BARU: A 23-year-old woman was sentenced to six years and seven months in prison and fined RM11,300 at a magistrate's court here for driving under the influence of drugs and causing the death of a Navy officer.

The accused, Nur Fatin Nasrah Suhaimi, pleaded guilty to all five charges that were read to her in two different courtrooms before judges Suhaila Shafi'uddin and R. Salini.

Her right to have a driving licence was also revoked for six years.

According to the charge sheet in the first court, the accused drove a car under the influence of drugs, causing her to lose control of the vehicle and causing the death of another car driver, Mohd Rizal Buseri, 31.

The act is an offence under Section 44(1)(a) of the Road and Transport Act 1987 for driving under the influence of drugs and provides for imprisonment of between three and 10 years and a fine of between RM8,000 and RM20,000.

The offence took place at 8.24am at the traffic light of KM4 Jalan Johor Baru-Kota Tinggi on Oct 10 (Saturday).

The accused was also charged under Section 26(1), Section 15(1), and Section 90(1) of the Road and Transport Act 1987 for driving without a licence, driving a vehicle without a road tax and driving without insurance.

Meanwhile, in a separate courtroom, the accused was also charged under Section 15(1)(a) of the Dangerous Drugs Act 1952 for being positive for methamphetamine and amphetamine.

The Act provides for a fine not exceeding RM5,000 or a jail term not exceeding two years, and subject to supervision under a correctional officer for not less than two years and a maximum of three years.

The prosecution was led by Deputy Public Prosecutor Tengku Amir Zaki Tengku Abdul Rahman and Noridayu Md Kassim, while the accused was not represented.

Nur Fatin Nasrah, in her plea, said she was sorry for what she had done and had asked for forgiveness from the family of the victim.

She added that she was currently taking care of two younger siblings and her parents.

However, Tengku Amir Zaki, in his argument, said the court should uphold public interest and send a message that stern action would be taken for the offence.

Judge Suhaila sentenced the accused to six years in prison, imposed a fine of RM8,000 with one surety and revoked her right to have a driving licence for five years.

She was also fined RM3,300 for the offence under Section 26(1), Section 15(1), and Section 90(1) of the same act and rights to have a driving license revoked for an additional year.

Meanwhile, judge Salini sentenced the accused to seven months in jail and two months of supervision from the National Anti-Drugs Agency (AADK) for the offence under Section 15(1)(a) of the Dangerous Drugs Act 1952.

One killed, two injured in three-car crash in Johor 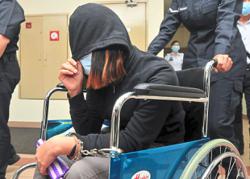