KOTA KINABALU: Warisan Plus will continue to do better and serve the people of Sabah, even after losing the 16th state elections on Sept 26, says Datuk Seri Mohd Shafie Apdal.

The Parti Warisan Sabah president, who is also former chief minister, thanked all those who carried out their responsibilities by casting their votes and also expressed his gratitude for the support given.

“Thank you for supporting Warisan Plus. I am sure this support would be a motivation and aspiration for us to do better in our struggles and in a bid to lead the government again in future, ” he said.

He said this in a short video clip released on Wednesday (Oct 14), a day after Opposition leader Datuk Seri Anwar Ibrahim made a bid to form the next federal government by meeting the Yang di-Pertuan Agong on Tuesday (Oct 13).

Shafie said in the message that he hoped the people would continue to have confidence and trust in Warisan Plus.

“This is not the end of our fight. We will double our efforts to ensure that we can unite and to strengthen our struggles, ” he said.

He said no one should be afraid to face challenges in daily life, especially in fighting for the rights of Sabahans until they succeed.

In his video, he also mentioned that becoming the chief minister for Sabah has been the greatest honour of his life.

“You (Sabah) made me a better man and a better leader. Pain is temporary but my conviction to inculcate values and to fight for a better nation will never stop, ” he said. 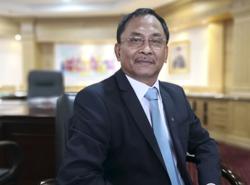