THE Federation of Chinese Associations Malaysia (Huazong) supports the import of Chinese-made Covid-19 vaccine which is now in its final phase of testing, China Press reported.

Its president Tan Sri Goh Tian Chuan said they fully supported plans by the government to bring in the vaccine once it has been approved and has passed halal certification in a bid to halt the spread of the coronavirus.

Goh, who was paying a courtesy visit to the Clinical Research Malaysia (CRM), said Huazong was coordinating talks between officials from China as well as agencies involved in clinical trials in Malaysia on matters regarding safety and approval.

The report quoted Goh as saying that CRM said it had plans to import the Chinese-made vaccine.

It was earlier reported that the vaccine developed by China was currently undergoing Phase 3 clinical trials in Argentina, according to its developer China National Biotec Group.

However, it has already been used to vaccinate several hundred thousand essential medical workers in China, a move which one Chinese health official claimed to have been supported by the World Health Organisation.

> Hong Kong actor Kenneth Ma, who is currently dating fellow actress Roxanne Tong, 33, assured fans that when he decides to get married, he will definitely let them know, Sin Chew Daily reported.

“I will not hold a surprise wedding. I will definitely let everyone know, ” he said at an interview recently, adding that he hoped to tie the knot before he turns 50.

The 46-year-old, who won Best Actor at the TVB awards earlier this year, admitted that the relationship was progressing well and that they were getting along with both sides of the family.

“She and my family are getting along fabulously. Out of 100 marks, I’d give her 90 marks. She’d give me the same marks so that both of us have room for improvement, ” he said. 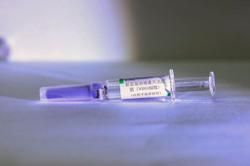