There are two imported cases - from India and Nepal - while the rest are all local transmissions.

Six new clusters have been detected with Sabah having four, Selangor and Penang one each.

The total number of active cases in the country has now gone up to 5,345 cases.

Cumulatively, the country’s total of cases since the outbreak began in January is 16,880.

Currently, 101 people are being treated at intensive care units, with 32 of them requiring ventilator support.

Four fatalities were reported, which means the Covid-19 death toll in the country has gone up to 163 cases or 1.0% of the total cases.

All four deaths are in Sabah - two in Sandakan and one each in Semporna and Tawau.

All those returning from Sabah must undergo 14-day home quarantine, says Health DG

About one week for Health Ministry to get data on whether conditional MCO achieving results, says DG 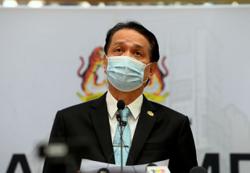