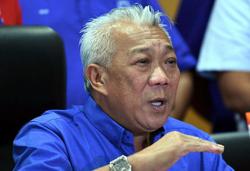 KUALA LUMPUR (Bernama): The corruption trial of Kinabatangan MP Datuk Seri Bung Moktar Radin and his wife, Datin Seri Zizie A.Samad, which was fixed for Monday and Tuesday (Oct 12 and 13) has been postponed due to the current Covid-19 situation.

Deputy Public Prosecutor Abdul Rashid Sulaiman, from the Malaysian Anti-Corruption Commission (MACC), told the media that Bung Moktar, 60, who is now Sabah Deputy Chief Minister and his wife, who is an actress, were now under quarantine.

Following which, the court fixed Dec 21 to 24 to hear the case, she told reporters after the case management, which was held in chambers before Sessions Court judge Rozina Ayob on Monday.

On Jan 2 this year, Bung Moktar maintained his not guilty plea to three charges of corruption.

On the first charge, Bung Moktar, who was at that time the non-executive chairman of Felcra is charged with taking a bribe of RM2.2mil from Public Mutual investment agent Madhi Abdul Hamid, 38, through his wife Zizie Ezette.

He is accused of committing the offence as an inducement to obtain approval from Finance Minister II for Felcra to invest RM150mil in Public Mutual unit trust products.

For the second charge, he was alleged to have received RM262,500 in bribes for himself from the same individual, Madhi, through Public Islamic Treasures Growth Fund (PITGF) account number 044797816 registered under Zizie Ezette’s name for the same purpose.

Both offences were allegedly committed at the same location at 12.16pm and 12.28pm on June 19, 2015, and all charges were made under Subsection 17(a) of the MACC Act and can be sentenced under Section 24 (1) of the same act which provides for a jail term not exceeding 20 years and fine not less than five times of the bribe amount or RM10,000 whichever is higher upon conviction.

Zizie Ezette pleaded not guilty to three charges of abetting her husband on the same matter at the same place, dates and time under Section 28(1) (c ) of the MACC Act and can be punished under Subsection 24 (1) of the same act which carries a prison term of not more than 20 years, and fine not less than five times of the bribe or RM10,000 whichever is higher if found guilty.- Bernama Anwar may have wanted to avoid King's anger in directing Pakatan MPs to back Budget 2021 at policy stage, says Kadir Jasin
Court sets aside fine, jail sentence against former DBKL executive director for power abuse
Bullets in the mail: Cops nab three, looking for one more over threat to Customs officer
PM: Covid-19 vaccines for 6.4mil Malaysians next year
Man arrested for allegedly raping eight-year-old after enticing her with candy
Colleagues of Gemilang cluster index patient in JB screened for Covid-19
Gerakan lodges MACC report over Penang’s funding for comics museum
Three lose a total of RM40k after being duped by separate loan scams
Man admits to threatening to kill his mother
Man charged with causing friend's death, hurting ex-wife