He said that his men are focusing on maritime security after reports have hinted that there are immigrants trying to sneak into Malaysia through Melaka.

"We have adequately covered overland entries and exits through strategic roadblocks, but we need to look after our coastal borders carefully as people will try to sneak in if it is not tightened,” he said when met after the investiture ceremony in conjunction with Yang Dipertua Negeri of Melaka Tun Dr Mohd Ali Rustam’s 71th birthday at Seri Negeri in Ayer Keroh here on Saturday (Oct 10)

He said maritime security is crucial to eliminate the spread of Covid-19 as Melaka is a top tourist destination.

"Those with symptoms can sneak into the country without the authorities realising," he added. 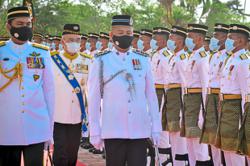