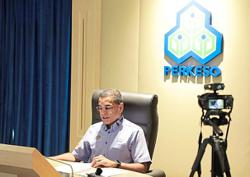 Its chief executive Datuk Seri Dr Mohammed Azman Aziz Mohammed (pic) said there would be no compromise with employers who falsify documents, adding that the cases involved among others, companies in Kedah, Selangor and Kuala Lumpur.

"We (Socso) view this matter seriously and take note that we will work together with the authorities including the police and the Malaysian Anti-Corruption Commission (MACC) for legal action to be taken.

Of the 30 cases, Kedah has eight cases, Selangor (six), Kuala Lumpur (five), Perak (three), Johor and Pahang two cases respectively, and one each in Kelantan, Sarawak, Sabah and Penang. We foresee that several more cases will be identified," he told a press conference at Menara Perkeso on Friday (Oct 9).

As such Mohammed Azman urged employers who had submitted false claims or inaccurate information, to come forward or contact Socso to return the funds under the PSU, hiring incentive and employee retention programmes.

Since the PSU was launched, a total of 281 complaints have been lodged against employers who failed to pass on the incentive payments to their employees.

He also confirmed the MACC statement issued on Oct 7 in relation to a Selangor company managing director who has been detained to assist into investigations over alleged fraudulent claims to get the wage subsidy aid.

"The case involved 185 employees and payments of about RM415,000. It is one of the 30 cases we have identified,” he said adding that RM11.8bil in wage subsidies have been paid to employers. - Bernama