MMEA: More mishaps at sea due to monsoon transition period

PETALING JAYA: The monsoon transition period has seen an increase in mishaps at sea with one fisherman dead and another four missing within the space of a week, says the Malaysian Maritime Enforcement Agency (MMEA).

Since Monday (Oct 5), five emergency cases at sea have been recorded, with four of them taking place on Thursday (Oct 8) — two in Selangor and one each in Penang and Sarawak, it said.

"Of this, 12 were successfully rescued, one death was recorded involving an Indonesian and another four victims are still missing, involving three Indonesians and a Malaysian in Selangor.

"All of the victims are fishermen using class A and C fishing vessels, as well as fibre fishing boats.

"A majority of the victims were saved but were found without safety jackets, except for the one victim in Penang who was found safe," he said.

Class A vessels refer to small boats such as traditional fishing boats, while class C boats are big vessels.

According to the Malaysian Meteorological Department (MetMalaysia), the monsoon transition phase, which started on Sept 24, will bring along thunderstorms, heavy rain and strong winds in a short space of time.

The monsoon transition phase is expected to last until early November.

"We would like to remind everyone wishing to carry out activities at sea to take precautions, such as wearing a safety jacket, referring to the weather forecast report and ensuring that their boat is in good condition.

"The public can also bring a personal locator beacon (PLB) along with them to sea, as well as enough food supplies," said Zubil.

He also reminded the public to inform their families of their destination and to also avoid areas beyond telecommunications coverage.

The public can report any emergencies or accidents at sea to the 24-hour emergency line at 999 or to any state maritime operations centre nationwide. 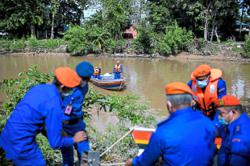