Inundated: The furniture factory during the last flooding in Tuaran.

KOTA KINABALU: A group of physically challenged entrepreneurs who make furniture to eke out a living are resolved to overcome even greater odds with floods twice destroying their factory.

The floods in June and another one recently forced them to depend on donations to rebuild the factory in Kg Baru Selaud Tuaran.

For about a year, the group, led by Azman Saidin who became disabled after an accident, was getting by with the furniture venture.

“However, the factory was damaged by the floods and we lost all the orders inside, ” said the Pusat Latihan dan Amali OKU Tuaran owner.

The 39-year-old said after their first hurdle in June, generous contributions helped them to refund customers and also rebuild the factory.

“We just started to get back on our feet and now this happens, ” lamented Azman.

He said besides losing everything in the factory which included completed furniture and uncompleted orders, tools, machines and materials, they also lost a rabbit farm.

“The farm was handled by some of us who were not able to make furniture. The farm had been accepting visitors, ” he said, adding that dozens of rabbits perished in the floods.

Azman said the group had to do things all over again now – “repay customers for upfront payments, clean up the area, and buy back what we can”.

The father of one said 11 persons including him who put up at the centre now had to rent a homestay until the building was restored.

Azman said they needed an estimated RM50,000 to get back on their feet, including paying refunds to customers.

“We really don’t know how to raise the money on our own as we have lost everything. We have no other choice but to depend on kind souls, ” he added.

He said the members of the centre, like himself, did not come from well-to-do families.

“We seek kindness from the public, ” Azman said.

Those who wish to help can visit https://www.facebook.com/Pusat-Perabot-Murah-Dan-Taman-Riakasi-Usahawan-OKU-Sabah-108087600769559/. 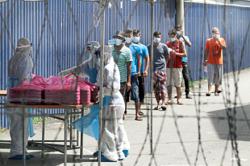