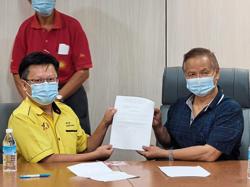 SIBU: Sarawak should be given 90% of the 150 medical officer (MO) posts that are vacant in state health offices and facilities instead of just 44%, says Sarawak United Peoples’ Party (SUPP).

Its education bureau chairman Datuk Ding Kuong Hiing said there were many Sarawakian MOs who had yet to be offered permanent posts in hospitals.

“We are unhappy with the percentage allocated to the state.

“However, we would like to acknowledge that 44% is an improvement compared to the previous allocation of less than 10%.“At least, it is an indication that the Health Ministry is listening to the voices of Sarawakians,” he said in a statement.

On Monday, the ministry announced that 150 MOs, who are currently on contract, had been offered permanent posts in state health offices and facilities.

Out of the total, 56% of them were MOs from Peninsular Malaysia.

Ding said based on experience, they were not expecting all MOs from the peninsula to take up the offer to work in Sarawak.

In the event of vacancies, SUPP urged Sarawakian MOs be given the first opportunity to these permanent posts.

He said SUPP vowed to continue fighting for the rights of Sarawakian MOs and to seek assistance from the chief minister.

“The ministry must implement its directive dated Feb 16, 2016.

“This directive clearly stipulates that priorities will be given to MOs who have passed the Part 1 or Part A of the parallel pathways of the MRCP (membership of the Royal Colleges of Physicians),” he said.