KUALA LUMPUR: The recent Sabah state election appeared to have set off a string of new Covid-19 infections, with at least one minister and four assemblymen confirmed to be positive.

All five were among those actively campaigning on the ground during the state polls. 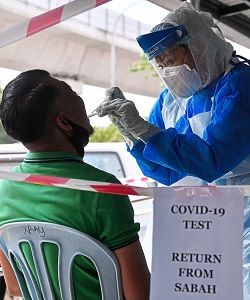 This resulted in Prime Minister Tan Sri Muhyiddin Yassin and several others, including ministers, having to undergo self-quarantine after all of them attended a meeting together on Oct 3.

The number of cases is expected to rise in the coming days as more people, including politicians, media personnel and those involved in the campaigning, get their test results.

In Johor, Maharani assemblyman Nor Hayati Bachok confirmed that she had tested positive for Covid-19.

In a statement issued by her service centre, the Parti Amanah Negara national Wanita deputy chief said she returned from Sabah on Sept 26.

“Even though there was no directive from the Health Ministry to self-quarantine, Nor Hayati took her own initiative to do so.

“She went for a second test on Sunday and continued self-isolating at home, ” the statement said.

The result of the second test, released on Monday, confirmed that she was positive.

“She has not attended any programmes since returning from Sabah. All of her close contacts have been identified by the Muar health office to undergo a Covid-19 test, ” the statement said.